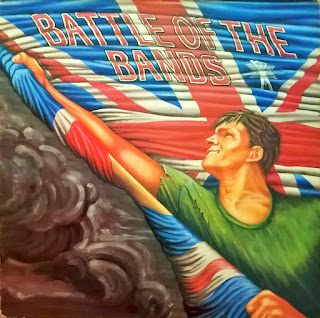 I, like you, usually find three or four good songs in a compilation and just kind of disregard the rest of the tracks. Sometimes I wonder why the person who put the comp together included that one, or two, crappy song(s) with the weird vocals and just assume the bass player for that band is the brother of the girl the compiler is banging at that time.

This one is different. This one has three songs I don't like but the rest are all gems.

Thin End of the Wedge plays a droning slow ballad with female vocals and annoying heavy metal guitar screeching in the background.

The Popes is a little too Danceteria-in-1986 for my taste. New romance dance music.

And It's a Tightrope sounds like three or four Bowie fans playing two or three different songs at the same time. It sounds like an unfinished song.

Now, despite the bad things I said about these bands, none of them are so terrible I have to skip them. I really can play this comp all the way through.

There are some really great moments on here. The first track by The Crack is a got' damn classic. It's from their 1989 album  "In Search of..." and it's the best song on that record. That's not my opinion, that's a scientifically provable fact.

I originally got this record for the Andy Pandemonium song which isn't bad but I was happy to hear a Private I.D. song that I didn't have and the ska-inspired track by Southbound - whoever they are.

Suspicious Minds by Mézzoforte is not a cover of the oldies tune but it's a mellow post-punk song with appropriate 80s new wave keyboard and just a slight twist of goth. Bingo Erotica by The Creamies is an odd choice because these guys only released one single in their days (this song isn't on it) but they did record a few other songs and this one is not really one of their best. It's not bad but they have better. I'll post them someday. The 3X song is the most mature song on the record. Well-composed power-pop with an MTV-worthy chorus.* MTV from 1982 I mean.

1 The Crack - Don't You Ever Let Me Down

6 This End of the Wedge

*I'm not really trying to see how many hyphens I can put in one sentence. I will someday but today is not that day.