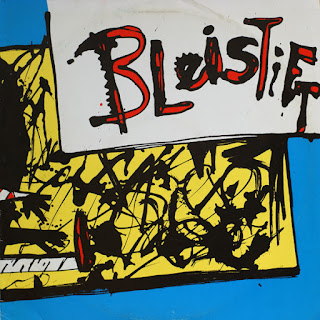 There is a 7" record from the Netherlands released in 1980 called "17 to 7 on 33" which was 7 bands who paid for the release by paying per minute. There were two bands who had a song that was exactly 1 minute long and the other 5 bands had songs that were exactly 3 minutes each. So 17 minutes by 7 bands at 33 rpm.

I no longer have this record and I really don't remember what it sounds like but I remember I wasn't very impressed with any of the bands except for this one. Bleistift ('Pencil'). I kept their song "Looking Swell" and found out they had one album. I don't think the album maintained the same quality of that first song but it is what I was expecting.

New wave guitar rock. No keyboards or horns. Up-tempo but too mellow to be punk. Not gothic enough to be goth. Too much structure to be 'experimental' or 'art rock'.  A voice that takes some getting used to. You know, the kind of stuff I post on this blog.