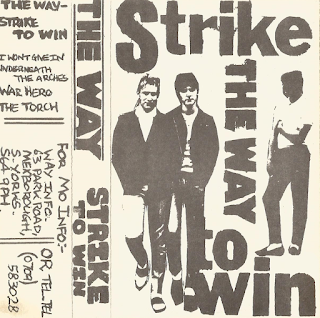 This is a mod-with-horns band from Britain in the mid 80s. If you're a fan of Redskins you'll appreciate this band.

This is a very obscure tape that I know nothing about. I bought it off eBay many years ago and the seller told a bit about the band but I didn't retain any of that information except it was a tape that was given to Roddy Moreno. I don't know what his reaction to it was.

"Tel Sutton, The Way's frontman/songwriter here... someone linked me to the YouTube vid today, so, if you'd like, I can offer you something of an 'upgrade' to flac, with no dropouts.
'The Way' originally formed as a 'Mod Revival' band in December 1984, with the now well-respected music author, Tony Beesley, on rhythm guitar. We had a great time, particularly the night we played the Scarborough Scooter Rally (June 85), but Tony left November 85. This was because I'd wanted the stance to become far more politicised (living in Mexborough, we'd been right in the middle of the Miner's Strike) and Tony politely disagreed. I'd become mates with The Redskins and when they split at the end of 86 I was already trying to pick up the baton. I recruited three lads from the best local Colliery bands.
'Strike To Win' was the first of three E.P.s of original material we recorded between 86-88. A 3* review in 'Making Music', plus a full-page feature in the Morning Star newspaper, led to a call from Phil 'Porky' Jupitus - then a GoDiscs A&R man - which in turn led to Peter Jenner offering to help the band get gigs down in London. The 'Official Dispute E.P.' (1987) followed, and after a support slot with Attila The Stockbroker we seemed to become one of the go-to bands for doing benefits. We were always out of pocket, but boy did we have some laughs. We decided to go all out with the 'All Thy Might E.P.' (1988), Angelic Upstarts' Mond Cowie producing... him staying at my mum's and travelling back-and-forth to Fairview Studios every day was gruelling but brilliantly educational. That tape got us proper London management, and a step up; our most prestigious being with Joe Strummer on the 'Rock Against The Rich' tour, New Model Army's end-of-tour gig in Bradford, and the Mean Fiddler WITH Bradford (the band - with a great feature review in The Independent). Headlining the 'National Anti-Apartheid Conference' at Sheffield Octagon, Nov87, was the highlights. We were also on telly, twice!
Towards the end of 1988 we were joined by Tracie Young - fresh out of her Respond deal with PW - and despite lots of interest - plus an appearance on Yorkshire Television's 'Calendar' - attempts to get a label to back recording an album fell through and we dissolved in Jan 1990.

The Way's bassist, Jonathan White, stayed with me through the bands 'Speedway Kick' (90-92) and 'The On' (92-94), before rejoining with The Way's trombonist, Andy Cato, and going on to huge success with Groove Armada (then Faithless; also replaced Barry Adamson in Magazine for the 'No Thyself' comeback). We're all still good friends.

I'm currently finishing my latest band, 'Dada Baba's debut album... possibly the best thing I've done since my late-90s band, 'Electrascope' (which is basically is, minus our lead guitarist), and it should be out later this year.

Cheers for the interest, and for reading my post.
Tel."

Tel, if you read this, thank you for this background on the band. This is a hundred times more information than I was able to find anywhere online.

I am very interested in those other recordings. If you have them you may want to consider uploading them to Bandcamp. Make the music available and maybe make a few quid along the way. You won't get rich, of course, but you might get enough for a decent lunch out of it.